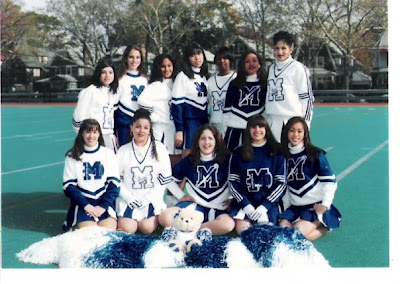 We had a housekeeper growing up who was more like a grandmother to us.  Her name was Aggie and that's where I get "I swear on Aggie" from.  We would never lie on swear on Aggie.  Never.

After Aggie retired in 1990 she still lived with us and we took care of her.  Everyday she would sit in the kitchen and watch her shows and before going back up at the end of the day she would make sure she had "money, watch and Tor picture."

The saying kind of stuck with us and when we leave the apartment or house we always check that we have everything, including, "money, watch and Tor picture."

Tor picture was a wallet size photo of my sister as a high school cheerleader.  It was the type of picture you wrote a message on and gave to your friends, and they in return would give you theirs.  Most people probably put them in a scrapbook or shoe box or drawer and forgot about them. Aggie carried it everyday up and down the stairs, to the beauty parlor, to church, wherever she went she had it.  As a grandmother it makes sense that she would carry her grandchild's photo, right?  But no one else would.

So when your wedding photographer offers you a great deal on wallet-sized photos to give your guests as a favor on your thank-you notes, say no thanks.  No one, except maybe your grandmothers, will want or keep the picture.  They'll most likely end up in a shoebox, drawer, or I'd bet money on the third option, the garbage.

Save your money and put it towards framing a beautiful photo from your wedding that you can give grandma and your parents as a gift.  They'll treasure it forever.

*I couldn't find the individual photo of Tor as a cheerleader on Facebook so I grabbed the one of the group of cheerleaders.