Words of Wisdom from Grandma Lenore 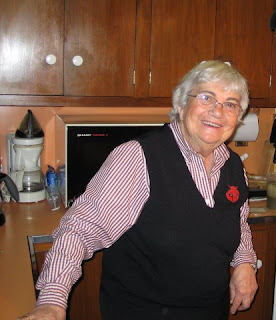 I was talking to my grandmother over the weekend about wedding albums and wedding videos. She has never seen my sister’s video – which is an unedited 3-part VHS marathon that Torey refuses to have edited – and she hasn’t seen mine in years. I don’t remember how we got on the subject but I think it might have to do with the fact that my grandfather who passed away in 2004 is on both of our videos and she wants to get together and watch both of our videos on Mother’s Day.

Anyway, she then told me that she hates her wedding album because my grandfather was too cheap to spend money on a real photographer. She told me that in those days (1945) the groom and his family and the bride and her family had different financial responsibilities. Grandpa Phil and his parents were supposed to pay for the bar and music and because photographing all of a wedding was a new concept they were supposed to pay for that too.

So in my grandmother’s words, my grandfather hired a “bum off the street” to shoot their wedding and because he was so cheap she hates her wedding pictures.

For someone who was married over 60 years ago, this is a great tip that still rings true today. You don’t want to skimp on your photo budget. They are the only tangible part of your wedding that you’ll have for years to come and will be able to pass down to your children and grandchildren. There are photographers in all ranges of budgets, but don’t hire someone just because they are the cheapest. You want to know that he or she is experienced and has shot weddings before.